Why choose the island of Panarea among all the islands of the Aeolian archipelago?

The island of Panarea is the most chic and worldly of all the Aeolian Islands. Panarea is a perfect mix of history, art, culture and worldliness, all elements that blend together to create a unique atmosphere of its kind.

From a geological point of view, Panarea is the oldest of the Aeolian Islands. For its beauty and uniqueness, it can be considered a perfect destination for a holiday. It is the smallest and lowest island of the Aeolian archipelago. It also includes a whole series of islets (Basiluzzo, Spinazzola, Lisca Bianca, Dattilo, Bottaro, Lisca Nera, and the rocks of Panarelli and Formiche) that make up a micro-archipelago.

Panarea in the past was the largest of all the Aeolian Islands. In fact, together with the rocks and islets that surround it, it formed a single island, divided into many parts by the rising sea level.

Very close to the port, Dittela is a small and picturesque district famous above all for its proximity to the Calcara beach and for the fumaroles.

San Pietro is the main town of Panarea and is also the center of the island’s social life. Here we find the typical Aeolian architecture: white houses with blue doors and windows.

The Museum of Panarea

The Museum of Panarea is a Detached Section of the Lipari Museum. It is housed in two rooms belonging to the Church of S. Pietro. Room I illustrate the geological, volcanological, and naturalistic aspects of the island. In the same room, some very ancient archaeological finds are exhibited. In Room II, on the other hand, materials from the Greek and Roman ages are exhibited.

Drautto can be reached along a short road from San Pietro. It is a picturesque district immersed in an atmosphere of total tranquility between the sea and the Mediterranean scrub, not far from Cala degli Zimmari, Cala Junco and the prehistoric village of Capo Milazzese.

The Prehistoric Village of Capo Milazzese

Right next to Cala Junco, stands the Prehistoric Village of Capo Milazzese dating back to the Bronze Age.

Basiluzzo was inhabited since the Neolithic age. It is a small islet with spectacular sections made up of basaltic colonnades with vertical prisms.

Punta del Corvo or Timpone del Corvo is the highest peak of Panarea with about 421m.

There are numerous tourist proposals to visit the island of Lipari: diving and snorkeling are very popular activities in Panarea. In fact, there are many points to discover. For scuba diving the Scoglio di Spinazzola and Lisca Bianca with its wreck, while for snorkeling the Formiche, Cala Junco, Lisca Bianca, and Lisca Nera and the surrounding areas Dattilo and Basiluzzo.

Trekking is a wonderful experience, especially during the winter and spring. Punta del Corvo or Timpone del Corvo, is the name of the highest peak in Panarea, 421m. To get to the top, along the path (marked) it takes about an hour. The climb is of medium difficulty: from the summit ridge, you can admire the whole archipelago.

Beaches and Sea of ​​Panarea

The beaches and coves of Panarea are not very crowded because, almost all of them, can only be reached by sea or after long walks from the town.

Cala degli Zimmari is the only real sandy beach in Panarea.

Calcara Beach is famous for the spectacular color of its crystal clear waters; and due to the phenomenon of fumaroles, vapors that rise between the cracks between the rocks and, in some places, heat the water up to even higher temperatures.

Cala Junco is perhaps the most beautiful bay of Panarea and perhaps also of all the Aeolian Islands. It can be reached on foot starting from the town of San Pietro.

Finally, Spinazzola is an inaccessible rock, elevated above the cobalt blue sea that surrounds it. The rock is home to a colony of dwarf palms, the only one of its kind in all of Europe.

The circumnavigation of the island of Panarea starting from the port of San Pietro to discover the island, its bays, and the islets that surround it. We will visit Cala Junco, located right in front of the Prehistoric Village of Capo Milazzese, the Caletta degli Zimmari (the only sandy beach in Panarea), the islets of Basiluzzo, Spinazzola, Lisca Bianca, Dattilo, Bottaro, Lisca Nera. During the tour, we will stop in the most beautiful places to take a swim in this extraordinary sea.

Although Panarea is the lowest of the Aeolian Islands, it still offers several itineraries for those who love trekking, nature and walks. Walking along its paths, we will meet the Church of San Pietro (the patron saint of the island), the main religious building of Panarea, with a suggestive view of the port and the islets in front. Next to the church is the Panarea Museum.
The island is all a succession of alleys and paths that offer incredible views of the sea of ​​Panarea and the seven Aeolian Islands.

The Cuisine of Panarea

Panarea stands out for its excellent local cuisine, with excellent fish dishes, but also other typical products such as the Aeolian caper and “pennula” tomatoes.
Aeolian cuisine is the result of the passage of different dominations that have followed one another on the islands over time. There are many traditional recipes linked to the peasant world and the earth with the use of aromatic herbs for the realization of typical Aeolian dishes and sweets.

The night in Panarea shows an unexpected scenario with the clubs that light up and the music that flows, the streets that are filled with life, and the fun that lights up everywhere. The center of nightlife is San Pietro, the glamorous lounge of the Aeolian Islands. Here begins the night of Panarea, among the places where you can enjoy an aperitif before immersing yourself in the engaging sound of the island’s discos.

The Island of Panarea is very well connected with Milazzo and the Catania airport.

It is also possible to reach the island of Panarea from Taormina and Cefalù with daily excursions. Visit SiciliaEscursioni.com. 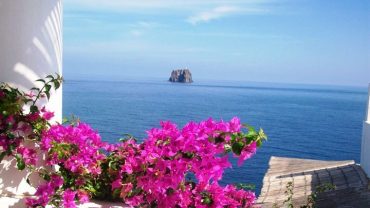 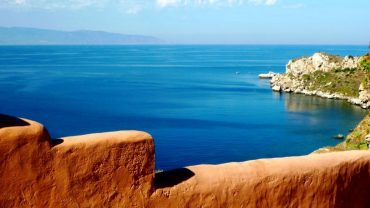